The Risk Management Functions in the Conditions of Globalization: Case Study of the Republic of Serbia

Globalization, which represents an important transmission mechanism of the crisis, has led to the necessity for controlling various risks of business, setting a new line of management in companies, regardless of the main business activity they are engaged in. The economic crisis in general, and especially the global financial crises (2007 and the present one) led to bankruptcy, and thus to loss of funds of many businesses and individuals. Therefore, it was necessary, on the one hand, to ensure confidence in the financial system and to maintain its stability. On the other hand, the development of corporate governance and separation of functions of ownership and management insisted on the creation of functions that directly report to the owners of capital, such as risk management and internal audit. The value of this paper is in emphasizing the new management function and raising awareness of the scientific public and businesses about the need for introduction of risk management functions in order to facilitate effective management of enterprises, although the survey (2012-2015) has shown that the existence of legal obligations, in this regard penal policy, is the only thing that effectively establishes and promotes this area.

Zlatija Jelenković has a Master degree in Economic Sciences in the sector of macroeconomics, acquired at the Faculty of Economics University of Belgrade. She has pursued a banking career since 1988 until the present moment, starting from Jugobanka osnovna banka Beograd to Raiffeisen banka a.d. Beograd, on various managerial positions. She is the author of several articles published in Serbia and abroad in scientific and professional journals (for example, Factor scan, Bankarstvo,etc.).

Lidija Barjaktarović has a PhD in Economic Sciences in the sectors of banking and finance. Since 2008 she teaches the courses in Banking, Risk Management and Corporate Finances at the Singidunum University in Belgrade. She has been Head of Master study programmes: Business Economics and Public Sector Management at the Singidunum University. She pursued a banking career in the period from 1998 to 2008. She started in Jugobanka A.D. Belgrade, after which she moved to Societe General Yugoslav Bank a.d. Belgrade, and then to Raiffeisen Bank a.d. Belgrade, to be promoted to the Head of the Regional Branch of Central Serbia. In 2005 she moved to Erste Bank a.d. Novi Sad to become the Director of Corporate Division. At the end of 2007 Erste Group appointed her a member of the Corporate Board and Corporate Working Group on the level of the Erste Holding Vienna. 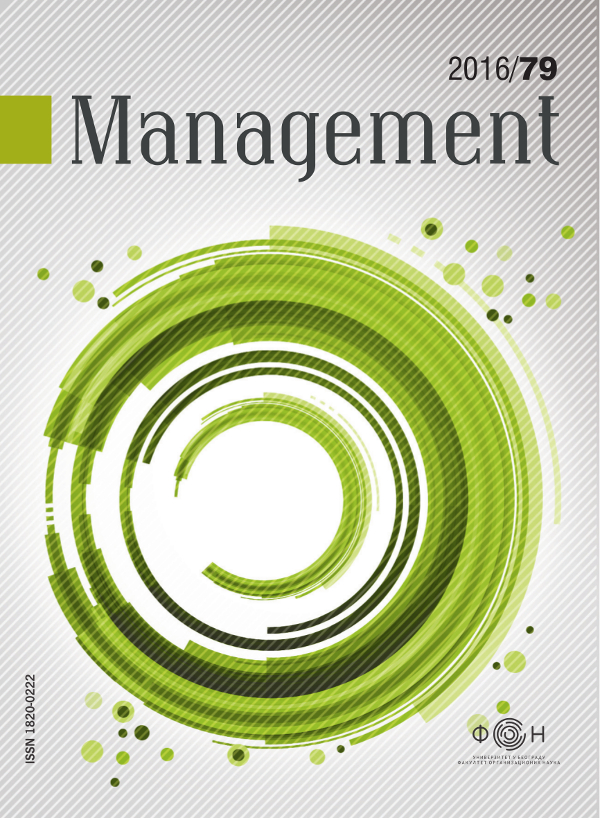 Published
2016-09-02
How to Cite
Jelenković, Z., & Barjaktarović, L. (2016). The Risk Management Functions in the Conditions of Globalization: Case Study of the Republic of Serbia. Management:Journal Of Sustainable Business And Management Solutions In Emerging Economies, 21(79), 37-45. Retrieved from http://management.fon.bg.ac.rs/index.php/mng/article/view/37/29
Citation Formats
Issue
Vol 21 No 79 (2016)
Section
Articles